Home Pimp is Caught With His “Rules 2 Da Game of Hoez!!!” Checklist

Pimp is Caught With His “Rules 2 Da Game of Hoez!!!” Checklist

Well, my mother likes to say it takes all kinds to make up this world:

Apparently it was written for McDaniel’s accomplice, Sandra Russell, in his prostitution-and-drug ring on how best to manipulate and control their prostitutes. It honestly reads like Pimping 101 based on the plots of movies that air at 2 a.m. on the Spike channel. 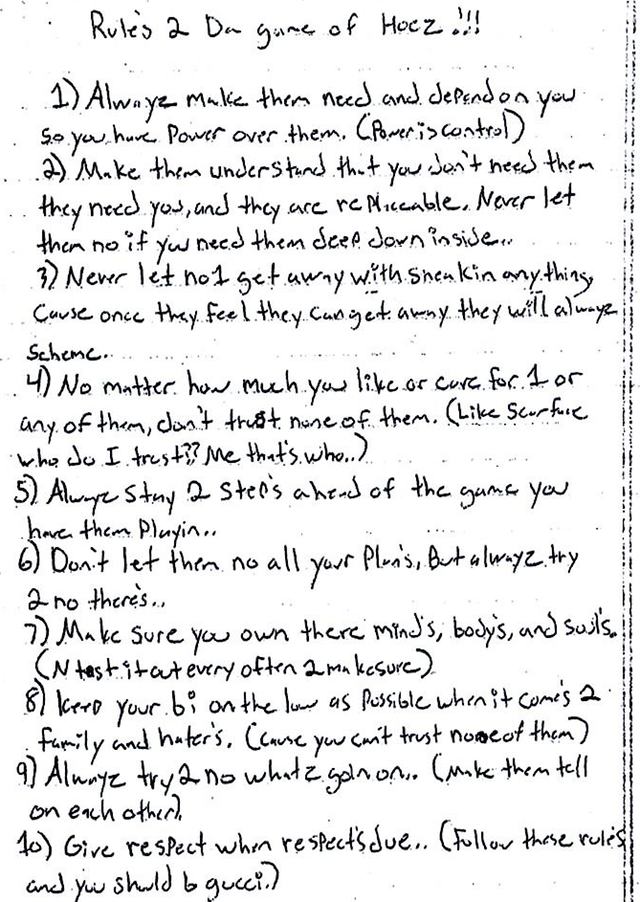 For those who may be having a hard time reading the scribble scrabble of one Pimp McDaniel’s here is a translation:

Now, if McDaniels’ wasn’t really trafficking in women this would be side-grabbing, split one’s pants funny. Since he really was a pimp (supposedly) than it’s moderately funny. I mean, you got to laugh from crying. The ignorance of it all. I would say this was Pimpin’ for Dummies, but the Dummies manuals are actually useful and legibly written. Unfortunately way too many young (and old) men who live by these same rules when their dating women they don’t have plans of putting on the track. Well, I will say Momma Dee would be proud. SMH.

Hat tip The Frisky via The Smoking Gun