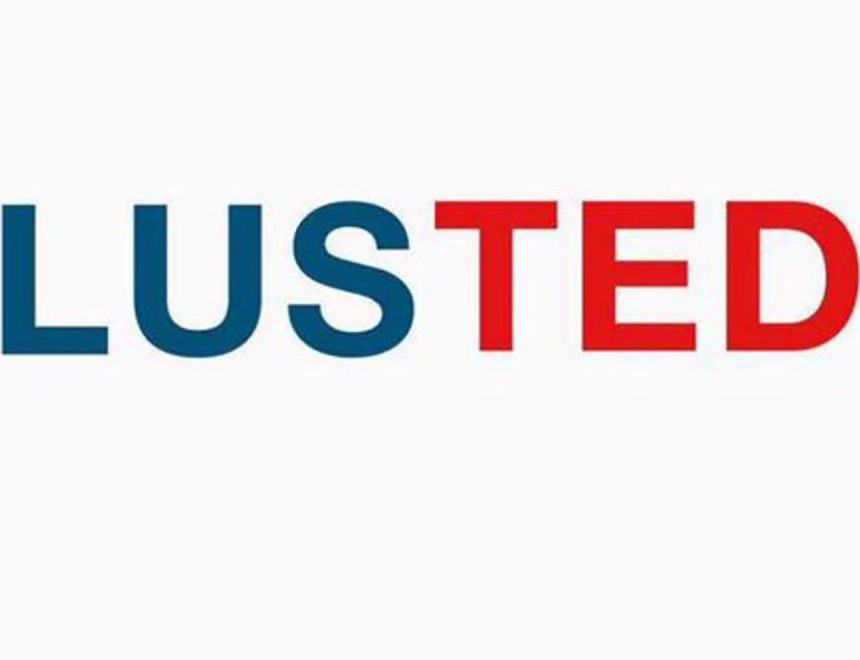 Who’s Up for a Ted Cruz Sex Scandal?

If you’re not on Twitter (seriously you should be) then you missed the hashtag bomb heard around the world:

That’s right Mr. Evangelical God Appointed The Only One Who Can Stop Trump Himself has apparently not been keeping Lil’ Cruz to himself. And not just one sordid affair, but many. Let’s dive into to what we know as of right now :

1. The National Enquirer is Spilling the Beans 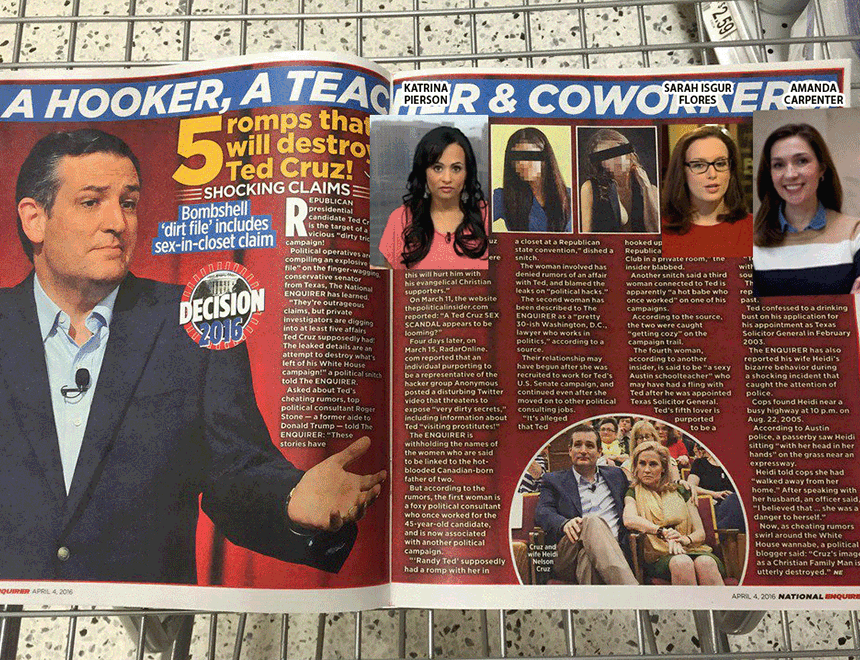 Yes, that National Enquirer. The one who gave us John Edwards, Jesse Jackson and Tiger Woods affairs have released an expose saying that Cruz is being investigated for affairs with at least five women. Yes FIVE. Lord only knows how Ted Cruz convinced five (six including his wife) is beyond me:

“Private detectives are digging into at least five affairs Ted Cruz supposedly had,” claimed a Washington insider. “The leaked details are an attempt to destroy what’s left of his White House campaign!” The ENQUIRER reports that Cruz’s claimed mistresses include a foxy political consultant and a high-placed D.C. attorney!

Seems like dude isn’t as pious as he’d like everyone to beleive. He already admitted he didn’t tithe like he should. Looks like he doesn’t respect his marriage vows like he should either. Now the Enquirer didn’t show the images of Cruz’s accused mistresses, leaving them a mystery. Well, that was until Twitter for a hold of the article, and that brings me to point two.

2. Two of Ted Cruz’s Alleged Mistresses Worked For His Rivals 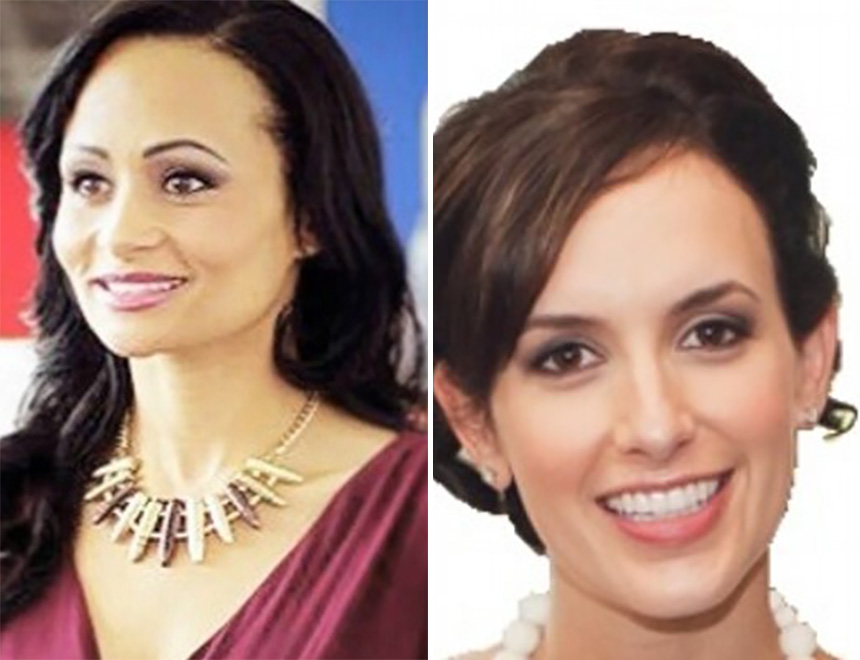 The other alleged mistress that’s been identified is Amanda Carpenter, a current CNN contributor and one time Ted Cruz communications director. She’s a total Ted Cruz homer, who has spent most of her considerable time on Twitter recently bashing Donal Trump. As of this writing, she’s been missing from Twitter for 21 hours.

Oh, and Katrina Pierson has set her Instagram to private: 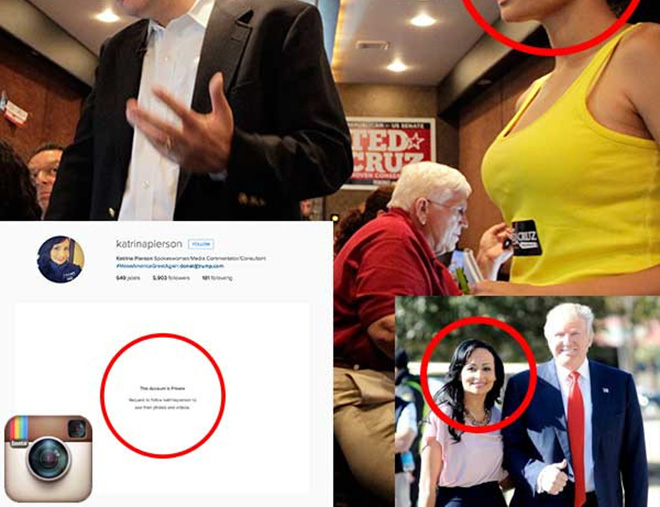 3. It May Be More Than A Sex Scandal 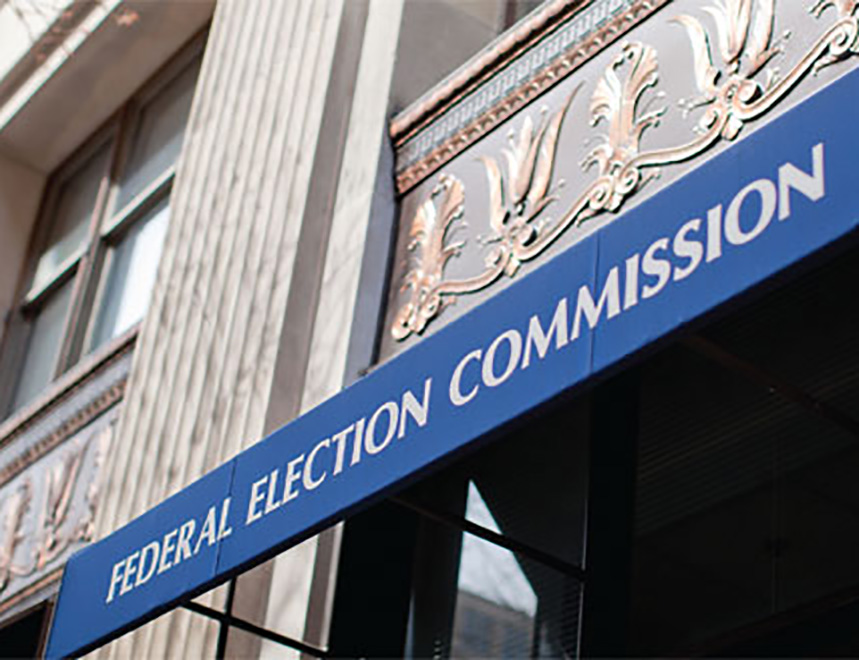 A Super Pac associated with Ted Cruz mysteriously gave Carly Fiorina’s campaign $500,000 and got the attention of the FEC:

The unexplained manner in which Carly Fiorina got her hands on half a million dollars of another candidate’s money this summer has now graduated from being an internet curiosity to becoming a legal matter, as the Federal Election Commission has begun an inquiry into where the money really came from and why. It’s the latest scandal to surface in the Fiorina camp after her rise in the polls began this month, and this one may go beyond a mere problem of perception.

It’s a legit question. Why would a Ted Cruz affiliated Super Pac give half a million dollars to their rival’s campaign? Sends up a lot of red flags, some I’m sure will be looked into further as this scandal develops.

4. This Isn’t A New Story. It’s Been Brewing For Months. 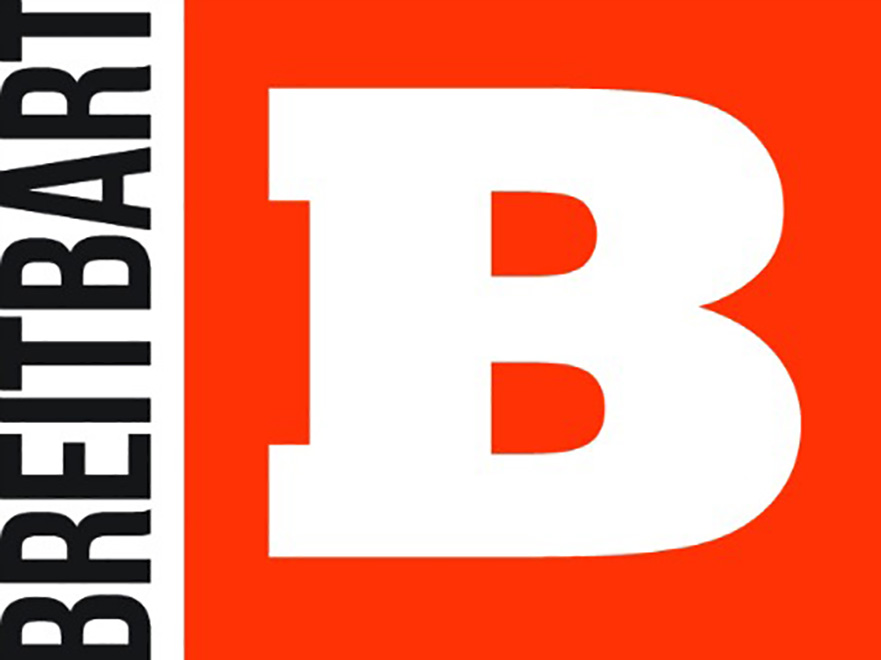 Turns out his has been an open secret for a minute. Back in Fabuary Breitbart reporter Allum Bokhari hinted at the possibility of a Ted Cruz sex scandal dropping soon:

Some people think #MicrosoftRubioFraud is the big scandal from last night. Wait until they hear the bombshell about Ted Cruz.

Been told it’s a few more days before we can drop the new Cruz goss. Nothing I can do 🙁

Today he expressed displeasure at not having been the first one to report the story:

I hate getting scooped.

It’s being speculated that former Editor-At-Large Ben Shapiro had a hand in killing the story.

5. Marco Rubio’s Campaign Was Planning On Releasing the News 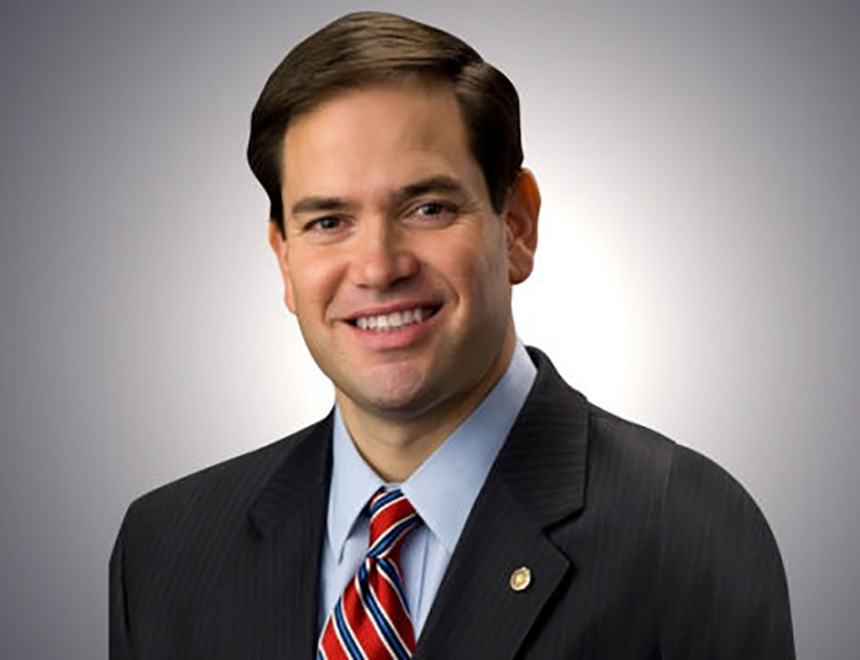 While Breibart had the information back in March. It’s beleive that Marco Rubio’s Campaign  knew all about the alleged affairs as well and was waiting for Rubio to win Florida before they released it:

Seems like “The Thing” wasn’t so important once it was clear that Rubio wasn’t going to win this thing. Outing Cruz meant hello Republican Presidential nominee Donal Trump. And no one wants that, especially Little Marco.

It’s not just the National Enquirer who has thrown their had into the Ted Cruz Sex Scandal ring. Drew Johnson of the Washing Times confirmed on Twitter late last night that the Enquirer got two of the alleged mistresses right:

COMING CLEAN: From what I know, at least 2 of the women named as Cruz mistresses by the National Enquirer are accurate #TRUMP#CRUZ#TCOT

This was after hinting that the Trump campaign would be leaking a major Cruz bombshell 24 hours after Rubio exited the race:

While that didn’t happen, here we sit, not quite two weeks later with #CruzSexScandal trending on Twitter.

7. If the Cruz Sex Scandal Is Confirmed His Campaign Is Over 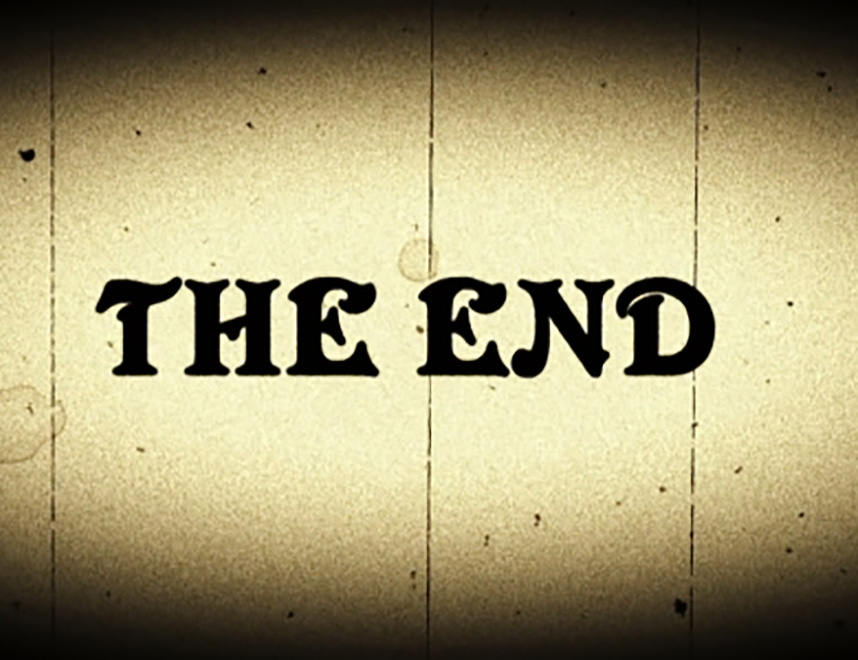 And this may be why the MSM has a total black out of the story. No one. And I mean NO ONE is touch it. #CruzSexScandal has been trending on Twitter since last night and yet not a peep out of anyone. Not even “liberal” media. The closest to mainstream reporting has come from a short article on Gawker. That’s it.

And in this world of the 24 hour new cycle where no scandal is too small, to have nary a peep from any major news outlet is quite telling. No one wants to hand Trump the nomination, and it they even report on this story they know that’s the end result. What a mess. What a glorious GLORIOUS mess.

And there you have it. Everything you didn’t know you wanted to know about a sex scandal you can’t even beleive is real. Okay. Maybe I’m projecting with that last bit, but come on…who saw Ted Cruz being able to get laid by anyone but his wife, and heck it’s clear she can’t beleive she’s had sex with him either .

Stay tuned. As the story continues to unfold we’ll keep you posted. No matter how hard the MSM may be trying, I don’t this one is going to go away anytime soon.

What’s worse? People who actually believe the trash in tabloids, or the ones who know it’s false &spread it anyway? #stupidity on all levels

You should ask all the Trumpster fires tweeting #CruzSexScandal at me this morning. Those are your people. https://t.co/oAVFisHU2m

And the plot thickens….

“These attacks are garbage…” https://t.co/DoGLnGlsSP#Cruzsexscandalpic.twitter.com/UoGRweog6m

I like how it’s just a Facebook post. No press conference or anything like that. By regulating it to a social media post, it shows they are not taking this too seriously (I’m referring to the optics not what they really might feel behind the scenes). Well played Cruz. Though I’m not sure it’s going to be enough.

And one more thing: Folk on Twitter are starting to refer to the scandal as the “Cuban Mistress Crisis.” Well played Twitter. Well played.

One more, one more thing: I like how he blames Trump. Blame Trump is apparently the new Black Obama.

10. Update: The Sun in the UK has Picked the Story Up

Though still nothing from the US MSM:

It involves Donald Trump’s Republican rival Ted Cruz and rumours he has had extramarital affairs with five women.
–
The claims were published by the National Enquirer and the hashtag #CruzSexScandal began trending almost as soon as the magazine hit the shops.
–
It reports the mistresses “include a foxy political consultant and a high-placed D.C. attorney . . . even a wild sex worker makes the cut”.

12. Update: And the Hits Just Keep On Coming

A CNN debate between a Donald Trump supporter and former Ted Cruz communications director Amanda Carpenter went off the rails Friday when the Trump supporter suddenly accused Carpenter of having an illicit affair with her former boss.

And we have officially gone to crazy town. You can read the whole piece here.

13. Update: The Trump Has Spoken

Trump response to Cruz accusation that he was behind the National Enquirer story: pic.twitter.com/WntMF76vjr

I have to admit, this is a really, really good response. I’m actually impressed. He manages to not fan the flames and get a consistent dig in all at the same time. Absolute perfection.  Put a fork in Cruz. He’s done.